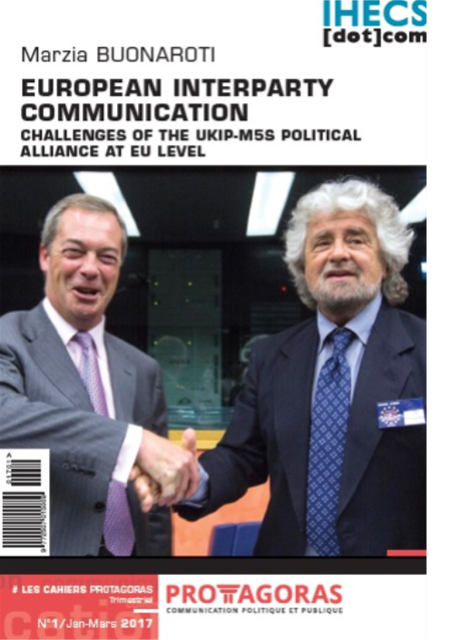 In a time of economic and financial crisis, many of the major governing parties have been held responsible for the economic setback and have been undergoing historic backlashes. This has resulted in the emergence of new Eurosceptic political actors. In such a context, the 2014 elections were a crucial event that saw the electoral exploits of many Eurosceptic parties all over Europe which, with clever communicative strategies, were able to convey and express the widespread discontent that many people felt, particularly towards the way the European crisis had been managed.

Two of the most voted Eurosceptic parties, the Italian Five Stars Movement and UKIP, formed a coalition in the European Parliament – an unfathomable coalition – given the clear divides in their political manifestos and in their vision of Europe. Through a thorough discourse analysis of the ideology, narrative and communicative approaches of the two parties applied before, during and after the European elections, this paper attempts to answer the question and investigate whether their alliance was based on a purely strategic objective where similar ideologies and political positions on Europe have very little space. This is a very current question that has continued, till today, to have implications and to shake the recently troubled EFDD group in the European Parliament

We use cookies on our website to give you the most relevant experience by remembering your preferences and repeat visits. By clicking “Accept All”, you consent to the use of ALL the cookies. However, you may visit "Cookie Settings" to provide a controlled consent.
Cookie SettingsAccept All
Manage consent

This website uses cookies to improve your experience while you navigate through the website. Out of these, the cookies that are categorized as necessary are stored on your browser as they are essential for the working of basic functionalities of the website. We also use third-party cookies that help us analyze and understand how you use this website. These cookies will be stored in your browser only with your consent. You also have the option to opt-out of these cookies. But opting out of some of these cookies may affect your browsing experience.
Necessary Always Enabled
Necessary cookies are absolutely essential for the website to function properly. These cookies ensure basic functionalities and security features of the website, anonymously.
Functional
Functional cookies help to perform certain functionalities like sharing the content of the website on social media platforms, collect feedbacks, and other third-party features.
Performance
Performance cookies are used to understand and analyze the key performance indexes of the website which helps in delivering a better user experience for the visitors.
Analytics
Analytical cookies are used to understand how visitors interact with the website. These cookies help provide information on metrics the number of visitors, bounce rate, traffic source, etc.
Advertisement
Advertisement cookies are used to provide visitors with relevant ads and marketing campaigns. These cookies track visitors across websites and collect information to provide customized ads.
Others
Other uncategorized cookies are those that are being analyzed and have not been classified into a category as yet.
SAVE & ACCEPT